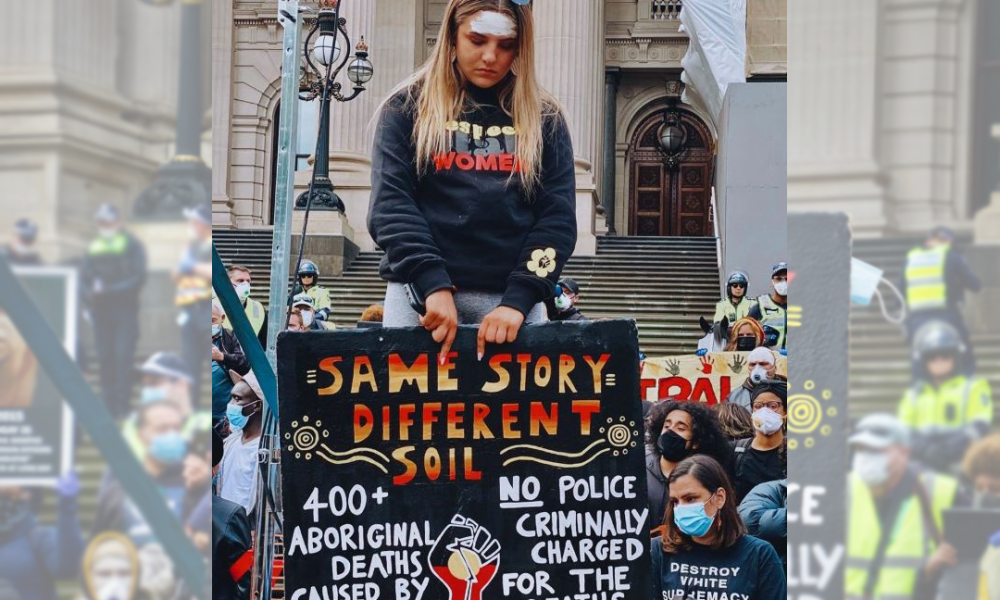 This is a transcript of a speech given at the Black Lives Matter rally in Melbourne, Saturday 6th June. You can watch it on NITV’s Facebook page – speech starts at 11:30.

My name’s Ky-ya Nicholson Ward and I’m a Wurundjeri, Dja Dja Wurrung and Ngurai-illum Wurrung woman. I just wanted to talk today and express my frustration and anger with the way the world is right now and how cruel it’s always been to our people.

I’ve had a really tough week dealing with everything that’s happening in the world, especially with what’s happened in New South Wales to that young Aboriginal boy that was slammed onto his face by a police officer.

I want to share some facts about Aboriginal people that you may not know, that should be taught in schools.

Aboriginal people are 28% of the prison population in Australia.

We are 50% of the youth detention population in Australia.

And we are only 3% of Australia’s whole population.

This breaks my heart because the government seems to not even care about us. You’re on our land. It’s the same story on different soil.

We are dealing with the same racism here, and Australia needs to talk about it, especially in schools. This can be done by teaching Australia’s true history from our perspective. Especially how Australia was built, and how my people almost got wiped out.

For Australia to be built, we were almost wiped out. That’s not taught in school.

There have been around 432 Aboriginal deaths in custody since 1991. None of the police have been charged for those deaths. Let that sink in your head.

It’s great people are supporting the Black Lives Matter movement, but you need to support this after this whole situation. Don’t just support Black Lives Matter because it’s trending. I’ll see you all on Jan 26 at the Invasion Day rally.

Ky-ya Nicholson Ward is a Wurunderi, Dja Dja Wurrung and Ngurai-illum Wurrung year 12 student at Hallam Senior College. She is also a lead dancer and singer at Djirri Djirri (check them out on Instagram!) and an artist (check her art out here!).